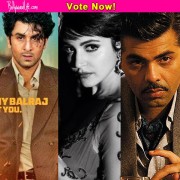 One's clothing sense is the most built-in part of one's personality. Today media has effectively grown stronger to make peoples' fashion statement better and better. And no doubt, movies have given their best in this domain. What is that appeals to the viewers of a movie? The star cast, the story line, exotic locations and what else? Outfits!!

One’s clothing sense is the most built-in part of one’s personality. Today media has effectively grown stronger to make peoples’ fashion statement better and better. And no doubt, movies have given their best in this domain. What is that appeals to the viewers of a movie? The star cast, the storyline, exotic locations and what else? Outfits!!

And when it comes to setting a trend, how can we bury our very own fashion icons? The recherché Bollywood stars! With viewers striking likes after likes for the lately launched trailer of Anurag Kashyap’s forthcoming movie “Bombay Velvet”, co-produced by Phantom Films and Fox Star Studios, we can vouch for one thing that they certainly can’t take their eyes off the outfits donned by the star cast in the movie. Bombay Velvet is swashed as a period film from the 1960’s era, starring the dashing Ranbir Kapoor (in the avatar of a tough guy Johnny Bajaj) and the glamorous Anushka Sharma (a high class prostitute turned society girl Rosy Naronha). The sheer grandeur of the get ups of Ranbir in the movie that make him look exceedingly sturdy are from Orosilber, a men’s fashion accessory partner for the movie.

Wouldn’t it be great when a single brand offers you everything related to clothing and accessories of up-to-the-second fashion? Don’t you find it outstanding to put on an out-of-the-box creation and go out seeing which people are awestruck and vie to follow your sense of style? Well, worry not, because there’s a solution for all you fashion lovers! Yes, you read it right. And it is Orosilber- The marquee that needs no introduction. Orosilber is another name for excogitation and craftsmanship. The company is a world of exclusive luxury fashion in itself. It designs, manufactures, fabricates and retails collection of high quality fashion accessories for men and women at affordable prices. Since the year of its establishment in 2001, the company has been able to yield not only high-quality clothing, but has also expanded its product range which includes exquisite cufflinks, ties, tuxedo stud sets, suspenders, handkerchiefs, belts, wallets, socks, silver jewellery, writing instruments, scarves, pocket squares and what not. With these at a single destination, you’ve definitely got your own heaven which is out with the old and in with the new!

Check out the trailer of Bombay Velvet and you would understand what we are talking about!

Get notified about new releases.